At LIAFARM we are constantly doing our best to provide excellent services to the Greek pharmacy.

Through the automated order execution standards systems and the strict quality controls, we ensure services with the highest quality.

We always strive to fully meet the needs of the modern pharmacy by constantly researching for the development of innovative solutions.

LIAFARM  is a member of the STROUMSAS Business Group. With 60 years of experience and over 200 employees, we are one of the most developed companies in the wholesale market of drugs, parapharmaceuticals, cosmetics and orthopedics nationwide.

Our main activity is the storage and distribution of drugs and related items in a network of 2,500 pharmacies in Northern Greece, the exclusive representation of products, the supply of private clinics, the promotion of related products in the market and logistics.

The STROUMSAS Business Group consists of the co-located pharmaceutical stores IONAS STROUMSAS SA (1959) and LIAFARM SA (2009) as well as the company INNOVATE SA which is active in the distribution and marketing of medical devices. 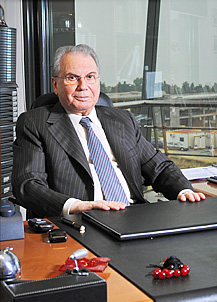 Ionas Stroumsas was born in Thessaloniki in 1930.

From 1936 to 1940 he attended the primary school of Valagiannis Schools and then during the Second World War he moved to the area of ​​Sykia in Veria where he continued his education and later to the 2nd High School for Boys in Thessaloniki. In difficult times with an adverse childhood and adolescence, he experienced the barbarity and hardships of World War II. As a Jew, he was chased by the Germans and hid in the mountains of Imathia. He had lost everything! At the age of 13 he was put on an execution row about to receive his death sentence. He managed to escape when the village’s priest in an act of self-sacrifice and heroism offered to take his place. He did not give up but he was a fighter!

Ambitious and stubborn, he started to pave the way for his success from early on. In 1948, a period when few people reached University level education, he took an exam at the Athens School of Pharmacy, from which he graduated with honors in 1953. His perspicacity was one of the reasons he was honored very early for his performance, receiving first place. From 1955 to 1958 he served in the army, where he was assigned at the storage of medical supplies division. The knowledge he gained during these 34 months of his tenure in the fields of organization and management of finances and warehouse were the decisive point of his subsequent course.

In 1959 he started his own business in a small shop in the center of Thessaloniki on Vasileos Herakliou Street.

In the years that followed he managed to create an empire. An empire that no matter how big it grew in his eyes it always remained his "shop".

Despite the fierce competition and adversity he faced, he managed to establish himself in the field of pharmaceuticals and to gain a leading position among similar companies in the field. Today, after 60 years of operation, having utilized all the modern tools of technology, a model logistic center of pharmaceutical products has been created. He spoke English, French and Spanish. He loved classical music and during his student years he used to listen to opera at the Athenian Opera Stage. He was Chairman of the Real Estate Committee of the Israeli Community of Thessaloniki for more than 25 years. He had been honored twice by the Panhellenic Pharmaceutical Association and had established collaborations with Multinational Companies. He was a member of the Chamber of Commerce, Industry and the Hellenic American Chamber. He was Vice President for 23 years of the Panhellenic Pharmaceutical Association as well as a member of the Board and Vice President of the Hellenic Pharmacists Association ENFAREL SA for more than 5 years.

He loved his job as a child of his own and was happy to see it grow every day. A man very smart, open-minded, insightful, with a business mindset, but at the same time stubborn and selfish. A fair and honest employer. The Head of his Family. He won the admiration and love of all those who knew him and worked with him.

A great leader, a great man, a wonderful father, husband and grandfather.